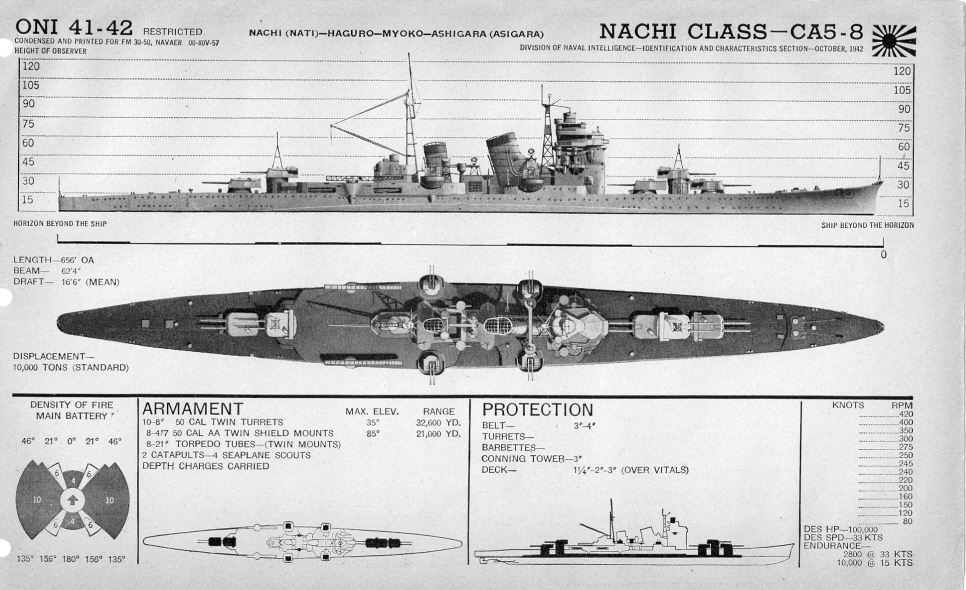 Nachi took part in the Battle of the Java Sea, operations in the Aleutians, and the Battle of Surigao Strait. She was sunk by aircraft from USS Lexington in Manila Bay on 5 November 1944.

While Nachi was still under construction at Kure Navy Yard in November 1928, with work remaining on her superstructure and main guns, it was decided that Nachi must be present for the Emperor Hirohito’s upcoming Coronation Naval Review. Accordingly, Nachi was “completed” and commissioned in the IJN. On 4 December 1928, Nachi attended the Coronation Review with Japanese, British, and other foreign warships. After the review, Nachi returned to Kure, until April 1929 when she was finally completed.

December 1941: Attack on the Philippines – Nachi covered the landings at Davao, Legaspi, and Jolo.

January-February 1942: Invasion of the Celebes – Nachi provided covered the landings at Menado, Kema, and Kendari, and later at Makassar, Dili and Kupang, Timor.

27-28 February 1942: The Battle of the Java Sea – Nachi among Japanese cruisers and destroyers that engage and defeat ABDA naval forces. Nachi‘s gunfire helped to sink the cruiser HMS Exeter.

26 May 1942: Operation “MI” – The Battle of Midway – The Nachi departs Ominato for the Aleutians as flagship of Vice Admiral Hosogaya’s Main Body. Nachi covers a convoy bound for the invasion of Kiska and later supports attacks against Attu Island.

June 1942: Operation “AL” – The Invasion of the Aleutians – Departs Paramushiro. The Second Mobile Force detaches and launches air attacks against American installations in the Aleutians at Dutch Harbor and Unalaska Island.

One of Nachi‘s three planes had been left behind for overhaul and MAYA had none of her three planes with her. On contact with the Americans, Nachi‘s two planes are ordered launched. At 0540, before they can be catapulted, Nachi‘s main battery opens fire. The gun blast damages the two-seat Type 0 spotter plane on the starboard catapult, probably a Nakajima E8N2 “Dave”. It has to be jettisoned. The remaining three-seat E13A1 “Jake” on the port catapult is launched. It carries out spotting duties throughout the action and then flies to Attu, but crashes on landing. About a month later, its crew returns to Japan by submarine.

Departs Ominato. That night, USS Halibut (SS-232) makes a radar contact astern at 9,500 yards. LtCdr. Galantin goes to full speed. Halibut is making 18 knots, but the contact continues to close the range. Galantin assumes his target is a destroyer. He crash-dives to radar depth and makes a setup. At 2125, at a range of 2,000 yards he fires his four stern tubes. One of the torpedoes hits Nachi, but it is a dud.

Surigao Strait. At about 0420 that night, ASHIGARA and Nachi pick up two targets on their surface-search radars. Vice Admiral Shima orders a torpedo attack and the cruisers turn to starboard to bring their tubes to bear. At 0427, each cruiser launches eight torpedoes by radar, but they obtain no hits.

Just after 4 AM on 25 October 1944 Admiral Shima’s force was moving up Surigao Strait not far behind battleships YAMASHIRO and FUSO. Nachi‘s radar contacted what seemed to be an enemy ship, just ahead. Vadm Shima ordered a torpedo attack by his cruisers, and at 0427, cruisers Nachi and Ashigara fired eight torpedoes. While doing so, the burning Mogami was seen to the north.

To clear Mogami, Nachi turned 20 degrees to starboard, but it was suddenly realized that Mogami was not dead in the water, but still heading south, straight for Nachi. Admiral Shima ordered “hard to starboard” and the engines stopped. Nachi veered right, but her momentum carried her right into Mogami. Shima’s evasion had brought the two cruisers nearly side by side, so they hit at a very shallow angle. Nachi‘s port bow slammed against Mogami‘s starboard forward.

The impact bent the prow, smashed a gun mount, and ripped open a 15 meter long rent along the waterline. Nachi pulled clear, and water poured through the gash in the port bow. The chain locker was flooding fast, and also seepage in the steering room. Speed was held to less than 20 knots, and the flooding was soon under control.

Later on both cruisers joined the other Japanese ships to escape Surigao Strait. Though both survived the night, neither would make it home. Mogami was sunk within hours of the collision, after repeated sea and air attacks.

The End of Nachi

As for Nachi, she proved only slightly longer-lived. On 27 October she sailed to Manila, for drydock repairs. She left drydock and waited off Cavite. On 5 November, Halsey’s TF 38 hit Manila in four waves of aerial attacks. Nachigot underway after the second wave, heading for the open sea.

In Manila Bay. At 1250, Nachi is attacked by a third wave of aircraft from USS Ticonderoga and Lexington About five bombs hit her and two, possibly three, torpedoes hit her in the starboard boiler rooms. Nachi is immobilized. Destroyer Akebono is dispatched to assist her.

At 1400, Nachi, on an even keel, is making preparations to get underway. She is joined by Akebono for a possible tow.

At 1445, another wave from Lexington hits Nachi with up to five torpedoes in the port side that blast her into three pieces. One torpedo blows off her bow that sinks at once, another sets off her aft magazine that severs her stern. It upends but remains floating. The other three torpedoes hit her amidships. Twenty bombs and 16 rockets also hit her. Vice Admiral Shima watches from ashore as his flagship is blown apart.

At 1450, the central portion of Nachi sinks in 102 feet of water E of Corregidor at 14-31N, 120E. 807 crewmen are killed including Captain Kanooka and 74 men of the Fifth Fleet’s staff. 220 men survive the blasts and the strafing. Kasumi and Ushio rescue Nachi‘s survivors. USHIO tows damaged destroyer Akebono, hit by two bombs and set afire, to shore.

March 1945:
Divers from USS Chanticleer explore the wreck and salvage several radar consoles, secret documents, maps of Japanese fortifications on Luzon, as well as some two million yen. In all 296 dives are made.