What do you know? If you’re behind in the polls in an election, and you start calling your opponents terrorists and hooligans, your supporters pick up on it. D’oh. 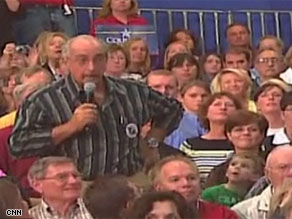 An angry supporter confronts Sen. John McCain at a rally in Wisconsin on Thursday.

“When you have an Obama, [House Speaker Nancy] Pelosi and the rest of the hooligans up there going to run this country, we have got to have our head examined. It’s time that you two are representing us, and we are mad. So, go get them,” one man told Sen. John McCain at a town hall meeting in Waukesha, Wisconsin.

It’s almost a cry for help, with the GOP party faithful amazed McCain could possibly be losing.

“And we’re all wondering why that Obama is where he’s at, how he got here. I mean, everybody in this room is stunned that we’re in this position,” another man said at a rally.

“I’m mad. I’m really mad. And what’s going to surprise you, it’s not the economy. It’s the socialists taking over our country,” another man said.